Yesterday, was February 14th; V-day, the D-day for every couple. Its the day when every seat of every theater, every corner of every mall and every bush of every garden is occupied by Laila-Majnus, the Heer-Ranjhas and the Romio-Juliets. They hold hands and steals some ephemeral gaze at each other. He pinches her earlobes. She fondles his hair. He caresses her lips. She fiddles with his fingers. These actions go unseen in the theaters, unnoticed in the malls and obscured from view in the gardens. And yet, she isn't really content. There are nothing painful in his pinches and her lips still have the warmth of his fingerprints. And yet, her forehead still plays host to the diabolic curves. The clock is her nemesis, the calendar being her perennial tormentor. She knows that thirteen hours or a day later, the interstices between her fingers would be prominent again. Her thumb would have her cellphone's keypad for company and her eyes would be searching for his name in the phonebook. Yes, V-day is fun, but its singular count is its singularity. He looks forward to V-days, while everyday she prays for WE-dayS.
He wants her support, her space and her flesh, but she only wants his money. TIME is that money.

Love your girl, because if you don't, then someone else will!

Don't wait for a special day to love her. Make every day special by loving her.
Posted by Vikas at 11:39 PM No comments:

Those magnificient men, and their flying machines!

Waiting for the blueline at the bus stop was an excellent opportunity to revise my lessons and keep a look out for the brand new cars and bikes. Even the bus journey up to and back from Sarvapriya Vihar was a time(and a very long one at that) to relish. The arguments with the blueline conductors, the tapping of the glass windows with a coin to set the bus in motion, the peep over to the ladies' seats every now and then, the jokes that were made on the way, the regular cursing of the government for the traffic arrangements(and the lack of it), the dismay at the sight of the ever under-construction flyovers, the constant gaze out of the window to check for milestones and the application of Newton's first law while getting off the bus are things that I reflect upon when my palms play curtain to my eyes these days. The overcrowded buses were never a cause for concern! These were excellent opportunities to hand on to the rear door and escape the torture of being amidst seventy humans in a narrow aisle meant to accommodate only twenty. And if we had the rub of the green, it even meant escaping the scrutinizing stares of the conductor, and traveling without a ticket all the way to the destination. The tussle with the conductor over the fare was in the itinerary of every day's trip. The conversation had these usual dialogues, "Bhaiya hum roz aate hain 5 rupay mein", followed by his taunt "to mat aya karre roz". The conductor's call to buy the ticket; "ticket bol" was always taken literally and preceded three different voices saying "ticket" one after the other which itself preceded a round of high-fives and guffaws. 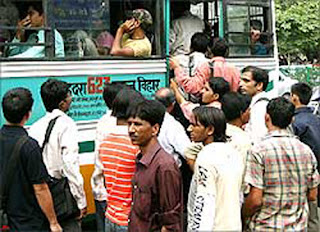 The bus service was 764 and the years was 2008.
The bus service is 729, and the year is 2011.
729 has always been the busiest bus route of the cluster. It has the most DTC buses on a single route(afaik). There's a bus to Mori Gate every three minutes. Bus every bus is still crowded, overflowing with passengers and overladen with the luggage that they carry. But this is 2011!
Traveling in these new DTC buses isn't very exciting. Infact traveling in a DTC bus has never been exciting. What's the point in traveling in a bus when the driver and the conductor know that they'll still get 15 grands a month irrespective of the number of passengers that they carry? And what's the point in traveling in a us that runs only when its doors are hydraulically sealed? Its the bluelines that I miss the most!
I miss the thrill, the shiver and the goosebumps that I got when I just about missed the all-important lectures even after leaving my home well in advance. I miss the ECGs on the speedometer when the bus accelerated and decelerated in rapid succession. I miss the incredible "space" that used to exist in the middle of the buses as both the front and the rear conductors asserted fellow passengers to move towards the end farther from theirs. I miss the hard turns that the pilot(read driver) took on the acute chicanes(read bends). I miss the races that the bus had with other buses. I miss the literal definition of "standing on your own feet" that the bluelines taught me. I miss the horror and terror on my STD and ISD friends' face who learned that I traveled in bluelines. I miss the surprised looks on my LOCAL friends' face who realized that I traveled and survived the bluelines. I miss the debates and government bashing that used to happen everyday. I miss those new faces that i got to see everyday.
I miss those magnificent men!! But more than that I miss their blue-green flying machines!!
Posted by Vikas at 9:58 PM No comments:

The article that wasn't published!

So finally Ajay Maken, the hon'ble minister for Sports & Youth affairs consented to be the chief guest
for the opening ceremony of Anugoonj. However, he wasn't the only person contacted by Team TracER
to do the honors. Here is an extract of our conversation with a few VIPs that we invited to cut the
ribbon.
Team TracER: Hello! Is that M S Dhoni?
MSD: Well! Of course. Its me. Who's this?
Team TracER: I'm calling from TracER, the newsletter for the annual cultural fest of IPU.
MSD: TracER? Oh. Just for a moment I was scared as, you know tracer reminds me of the tracer
bullets that the Steyn (and other)guns fired at us in SA.
Team TracER: Oh okay. So we were just wondering if you could be the chief guest for the opening
ceremony.
MSD: Well! Of course. You know, Gary just tells us to enjoy out there and play our natural game. And
that is what we would do. The wicket right now looks flat...
Team TracER: But MS, what has it got to do with our fest?
MSD: Well! Of course. This is my standard response to any question that is asked about my future
plans.
Team TracER: MS its one of north India's largest cultural fests...
MSD: Well! Of course. I'll toss a coin, if it a head, then I'll come and if its a tail then..beep..beep..beep
Unfortunately, after hearing this, our reporter disconnected the phone as he was well aware that there's
a better chance of having peace in west Asia than MSD winning a toss.
We then contacted Mr. Suresh Kalmadi, the president of the IOA and requested for his presence at the
opening ceremony.
Team TracER: Hello Mr. Kalmadi, we're TracERs.
SK: I told you not to call on my cellphone. I've had enough of you CBI people. I told you na that i'll
give you the details for every single penny that WE and not I alone, have spent for the games.
Team TracER: No no Mr. Kalmadi, we aren't from the CBI. TracER is the name of the newsletter for
Anugoonj, the annual cultural fest of GGSIPU.
SK: Oh! I knew I knew!! I was expecting a call from you(What??)
Team TracER: Oh that so nice of you sir. Could you please be the chief guest for the opening
ceremony?
SK: Oh you're from IPU! Your under-construction campus reminds me of the magnificent stadia that
we had just about put up for the games. Better than Beijing Olympics. Better than the Incheon Asiads I
must say. I think the village was like the one we had at Athens....
Team TracER: Sir...Sir...Sir, the fest?
SK; Oh! I forgot. Nostalgia, you see. I'll surely come. Just inform me if you need other equipments like
treadmills and stuff for the athletes. I have contacts, and you might just have get a great deal.
Team TracER: But sir Anugoonj is a cultural fest!
SK: Oh yes. You may want to contact Spectak, the company that organized the opening ceremony for
the games. What a ceremony it was! I still remember the cheers that I received. You might even get that
Aerostat if its still intact. I'll talk to Lalit(Bhanot) about it.
Team TracER:Oh sir that's so nice of you. But I guess we have everything in place. If you could just
confirm your presence...
SK:Oh my dear its not about.. Oh wait a min, I have a call. Just hold on.
(After 5 minutes) Yes, who's this?
Team TracER: Sir its, me from TracER.
SK: What the .... I told you not to call on my cellphone. I told you I've had enough pf you CBI
people...
Team TracER: No no sir! We're not from the CBI. TracER, the newsletter for Anugoonj.. remember?
We just talked about the opening ceremony?
SK:Oh! I knew I knew!! I was expecting a call from you..beep..beep..beep
Unfortunately, after hearing this, our reporter disconnected the phone as he didn't want to hear the same
cassette again(and also because he still had a grudge against the committee for the over sized shoes that
he received while volunteering for the games).
The reporter then threw his cellphone in the bin and decided to personally visit a few well respected
people and invite them for the ceremony. Mr. Maken was the first person to be approached, and he gave
his consent. No complaints, no demands!

Vikas
Kozhikode, Kerala, India
I think I'm Peter Pan but my buddies prefer calling me Don Quixote. I've no problem as long as they see themselves in me!